Today someone pointed out something about this ongoing series. He said, “Don’t you think that it’s a bit ironic that you have a series called, ‘Care and Feeding’ and you haven’t covered food issues, yet?” I pointed out that it was really odd that I hadn’t covered it yet, but this was far from the definition of irony. He then set his head on fire and then stuck it in the garbage disposal to stop the pain. From what I understand, this is a common reaction to Neurotypical and Aspergian interactions.

I am not sure about that last part, but I wouldn’t be surprised… and it would explain a lot.
So… here it is…
Part 10 – Food Issues.
It doesn’t matter what comorbid conditions, communication issues or sensory issues your Aspie has – it is likely that your Aspie will most likely have some kind of issues with food. The main reasons are Habits, Oppositional Behavior, Texture and Taste.

Habit
Asperger’s Syndrome specifically, and Autistic Spectrum Disorders in general, have rituals listed as one of the diagnostic criteria. Many people take this to mean watching Judge Wopner and Jeopardy, having to do meaningless things ad infinitum, but this is not always the case. In many cases, you will find that your Aspie will fixate on one type or a very small subset of foods. This, believe it or not, can be a direct result of ritualistic behavior.

Sometimes, we get stuck. I knew an Aspie who was stuck on strawberry pie and cheese. That is all he would eat. When we are stuck in a food groove, it’s may not even be a case of what we want. Obsessions work like that… we are literally stuck.

I know it’s frustrating for the Neuotypicals in our lives, but imagine how hard it can be on your Aspie. Imagine if your Aspie is one of those few of us that cherish new experiences… Now imagine that he’s stuck on crappy frozen pizzas, lasagna or french fries. Many of us buck against our obsessive tendencies. It is a sign of weakness… we can’t even control our own brains.

Often, in these situations, you will find that trying to break the ritual will only lead to: 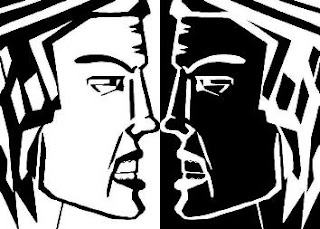 Oppositional Behavior
The phrase Oppositional Behavior is most often used when dealing with children and Oppositional Defiance Disorder. I, personally, feel that this should be considered a possible comorbid condition, but there have not been any studies linking ODD to Autistic Spectrum Disorders… And this, in my opinion, is only because it has not been looked for.

Oppositional Behavior is extreme disobedience. While experiencing an oppositional episode, you will see disobedience, unreasoning anger, possible LONG tantrums or even the dreaded MELTDOWN, often over trivial matters. It can lead to irrational arguments in which your Aspie will just not give up. Winning the argument will seem to be the most important thing at that moment. The odd thing is that during these episodes, the Aspie will not perceive themselves as being argumentative or even difficult.

Oppositional behavior is almost exclusively directed at an authority figure (parents, coach, or teacher. This can also lead to your Aspie being a mental bully, using language skills to taunt and abuse others.

Why is this listed under food issues? Well… Because often, new foods are often presented in a “Here – eat this” manner. Many times we don’t like being TOLD what to do. If you have experience with and expect your Aspie to be oppositional, then you might want to try a “Would you like to try some of mine?” approach. Forcing your Aspie to eat a certain food against their will, will often lead to them deciding that they hate the dish, the genre, and the ingredients – and eventually COMPLETELY removing a large selection of foods from possible future meals.

Texture
I covered texture a LITTLE BIT in the sensory issues part of this series, but I feel that it could be expanded upon more.

Due to the fact that we are “Mis-wired”, it is relatively easy for us to forge negative associations with any number of things. Anything that is new, unusual or uncertain can cause cognitive dissonance, stress and anxiety… Once one of those things has been triggered, there is little that can be done to go back.

Some Aspies will not eat spaghetti because it reminds them of worms. Some dislike Asian food because rice noodles are slimy, or don’t taste right (because it’s not wheat). Others hate okra because their first taste of if was cooked by someone who didn’t know how and turned it into vegetable snot.

These texture issues may not even be something that your Aspie is aware of, and as such, they may not be able to even tell you WHY they don’t like it.

Taste
Autistic Spectrum individuals tend to be hypersensitive. This is not about your Aspie’s emotional state, but their perceptions. Hyper-sensitivity means that one or more of your Aspie’s senses are far more acute than those of Neurotypical’s.

When it comes to food, smell and taste can REALLY cause problems. Many people love the taste of red peppers, green peppers, sweet peppers and banana peppers, but I don’t. The phytonutrients that give them a slightly bitter taste are… well… unbearably bitter for me. So much so that chicken cooked WITH peppers, whether or not I eat the pepper itself, is RUINED.

Spices can be overwhelming, as can acidic flavors, bitter ones, sweets, savory ones.

ANY overwhelming sensory input can cause stress, anxiety and cognitive dissonance. Once traumatized in this manner, it is a sure bet that your Aspie won’t like the item in question.

How do I deal with food issues? I am afraid my Aspie is going to become malnourished or worse!

“I know you don’t normally like ***insert food item here***, but this is REALLY tasty! Would you try a bite? For me? If you don’t like it, there is no harm no foul!”

That has worked for me in the past. It IS manipulation… but sometimes manipulation is necessary for us… we might not like it… but what are you going to do?

For the record… that tactic has introduced me to many dishes that I now adore!

Another good way is to go to a buffet… there is bound to be SOMETHING your Aspie can eat, and you have an opportunity to find others.

P.S. I advise that you find an Indian food buffet… The food has pleasant textures; colors; it is flavorful and still mild.