I participate on a couple Autistic Spectrum message boards. On one of these, I have been sharing this series – partly as a form of shameless self promotion; partly to get feedback and further ideas for the series; and partly to help others understand our condition. Recently a comment was made on the board that was humbling… it proved that I was helping people.

The comment was: Feralucce, (This is my username on this site… and many others) I think the thought that you put into these are great. I wonder how many Aspies are aware of what their problems actually are, rather than falling into the trap of just thinking “I hate it.”

First off, I wanted to thank the individual that made this comment. After an incredibly hard couple weeks dealing with RAMPANT OCD (I collect certain things… In a certain series of figurines I collect, I missed two… That I didn’t even know were out. The OCD backlash was so bad that I actually had nightmares about it.), a bipolar downswing, some drama in my life and physical issues… I was in a pretty bad place emotionally… So, when someone made a statement that states that my efforts helped someone… it made a huge dent in all of the fuckwittage of the last two weeks.

I replied in that message board, but I feel what I said there… bears repeating here. This blog is, after all, a sounding board and reflection of what it is to be that uniquely fucked up individual that is me… for good or for ill…

So, here is my response:
The thought that goes into each article is part of a process. I don’t like being a slave to invasive thoughts… and with OCD and Mixed bipolar on top of Asperger’s my life is rife with them. The process started long ago with a simple reaction. I’ll not go into detail, because I am still embarrassed by it to this day… but the reaction was alien to my emotional and intellectual make up. So alien, in fact that I had to stop and say – “Well… that’s not at all how I feel! What the hell?”

I kind of visualize our thought processes a lot like this: 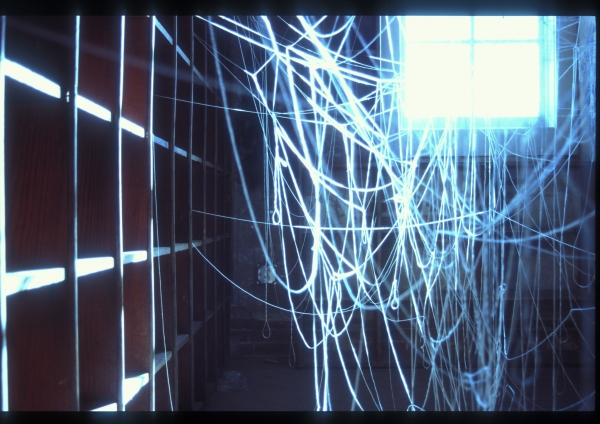 The things that an NT process normally, that end up in neat lines, end up tangled for us. So, when something prompts an emotional response or an intellectual resonance – instead of prompting proper neuron firing (in this analogy, something akin to a guitar string sounding a pure note), we get tension that pulls on something else…

Since I don’t like those alien thoughts and “That is something I did not know about myself” moments… I take time… pull that string, follow it back to the snarl or intersection of other lines… and keep going til I can understand what it is that is causing what ever reaction i am having.

I have always believed that we view the world through a warped lens whose imperfections are formed by our own experiences… I believe that holds true for Aspie and NT alike… and like the laser created “pilot star” used in modern astronomy… if we don’t have a way to plot those imperfections, we have no way to truly understand ANYTHING outside of the microcosm of our own, limited minds and perspectives.

And due to some issues in my childhood (summation: a teacher mocked me in front of the whole class because I was different, because I had special needs), I vowed that I would never be beaten by knowledge… That I would understand every piece of information that came across my path. Sometimes I fail… for a while… But never for very long.

I know… This post was all about me… Rambling deep thoughts and … feeling things… but sometimes we have to indulge.

Credit for the illustrative image above:
http://lisamaione.com/files/gimgs/47_roomscan1.jpg

3 thoughts on “Care and Feeding of your Aspie: Supplemental – Response to a reader comment”