Back in the day… Which was a Wednesday, by the way… I used to play a game on my Playstation called “Spyro the Dragon”… an odd, but charming little platformer. For the record…I LOVE platformers… now, ask me if I am any good at them… (I’m not). Since I am not good at them, I get a lot more gameplay out of them than most people.

ANYWAY… over the years there have been MANY games in the series.

I have played most of these games. (there are a couple that were on consoles that I did not own – mostly portable) So Spyro and his franchise is a beloved and TIME CONSUMING series for me.

It was called Skylanders: Spyro’s Adventure. The game was unique…I had never seen anything like it… The starter pack came with the game, several figurines and the PORTAL OF POWER!!!

It sounds a lot more impressive than it is, but it is one of the coolest advances in video gaming I have ever seen. The PORTAL OF POWER!!! (Sorry, I can’t help myself) is a peripheral for the console (cross platform) that connects to the game. When you put any of the figure on the PORTAL OF POWER!!! they pop up in the game.
What’s that? That’s the coolest thing you’ve ever heard of? I know, right?!
ANYWAY… I bought the starter pack because I did not realize what was in it and what it entailed… I bought it because it was the next in the series of beloved games…
Big mistake… When I got it home…I discovered the coolness… and then… ENTER OCD!
My CDO (Like OCD, but the letters are in alphabetical order… like they should be) latched onto this like… well… like OCD does anything… Like a friggin’ Pokemon Trainer, I had to buy them ALLLLLLLL!!!!!! Which was really that bad… it was a tad expensive… but the released them in waves, so I was able to feed the compulsion over time.
I actually missed the release of one because some stores (Toys-r-us, target and walmart) had EXCLUSIVE characters and I didn’t know that at the time. I eventually had to order him off the internet. His name is Whamshell and looks kinda dumb… but CDO did not want me to get the cool ones – it wanted them all.

Finally… I had them all. It was a good day… my CDO could rest… and so could I…

This is a photo of the complete collection… This is not MY collection, mind you… but you wouldn’t see anything different… 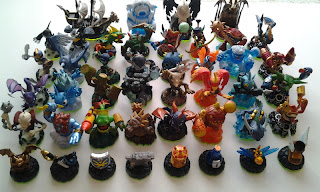 Then, one day, I am at Gamestop… and there is an ad for Skylanders: Giants… Itis a whole new Spyro game… AWESOME… CDO TO THE RESCUE…

Anyway… I got it and started collecting.

I have almost all that are out… fortunately, my brain doesn’t care about color variants or I’d have to spend a lot more. I still need Jet-Vac, Drobot 2, Lightcore Chill, and Lightcor Hex. I even have a Molten Hot Dog, Scarlet Ninjini (that one actually gave me nightmares when I missed a chance at my local store), and all the legendary variants. It is not through a lack of due diligence that I do not have them…

It is because Activision and Toys for Bob (the companies involved in Skylanders) have had the most back asswards, ridiculous release schedule I have ever seen.

But that is neither here nor there.

This morning, I receive an email update from Toy-r-us… yes…I am a kid’s club member… STOP JUDGING ME! Announcing… This… 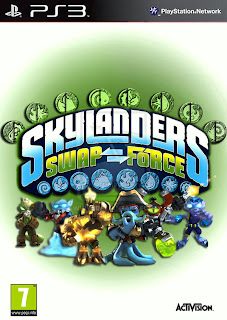 I have no problems with the fact that they are releasing a new game… My CDO is cheering… my wallet is groaning, but we will learn to live with it…

Then my CDO started screaming… And I kind of agree with it… How can you announce the release of the new game before you have even release all of the figures from the previous games? What the… well…I’ve been trying to avoid cursing in my blog… but today it is well deserved…

What the ever-loving monkey fuck were they thinking? I am pissed off.