When psychiatrists discuss behavior, they refer to “models”. There have been numerous models used to describe the behaviors associated with autism in the years since scientists accepted that there is a neurological basis for the condition. While none of them have completely described the Autistic condition, they have made significant inroads in understanding the characterization and cognitive basis for Autism. The current understanding has it explained as a series of cognitive deficits and a complex disorder in information processing.

There is a higher than average concentration of Autistic Spectrum individuals in the IT industry, and the researchers feel that the results of this study help explain this. While this information is true… I believe it is far more likely that the reason for this is that the average IT job allows the Autistic Spectrum individual (I am toying with the word Autist to simplify this concept and compliment the term Allist) the freedom to work with little in the way of outside distraction. With most IT positions being managed by a ticket system, complaints are logged into a system and assigned to IT professionals, there is very little interaction with the public needed. Further, computers act and react in predictable ways, allowing the Autist to problem solve in a logical and progressive manner. 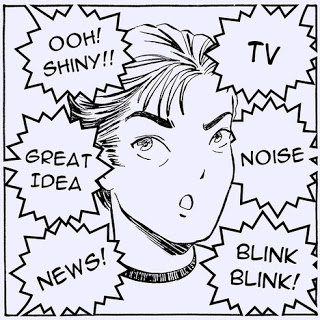 As you know, Autistic Spectrum Disorders are a class of lifelong develpmental disorders that affect social interaction and communication. Studies have shown that Autists have an increased ability to focus (hyper-focus) on certain tasks benefiting from a greater attention span and ability to process information on those tasks.

Professor Nilli Lavie of the University College of London hypothesized something that I have stated for years: the combination of hyper-focus and distractibility (It’s a word… I may have made it up, but distractibility is soooo a word… Use it…pass it around… get it into common parlance… let’s get it in the dictionary!) is a result of the Autist’s brain to process a higher volume of information than that of an NT. (I’m just coining new words left and right tonight!).

“Our work on perceptual capacity in the typical adult brain suggests a clear explanation for the unique cognitive profile that people with autism show,” she says.
“People who have higher perceptual capacity are able to process more information from a scene, but this may also include some irrelevant information which they may find harder to ignore. Our research suggests autism does not involve a distractibility deficit but rather an information processing advantage.”

Before I continue, it has been pointed out that Nillie Lavie used distractibility… So… I copyrighted it… and great minds think alike… use it… pass it around… let’s get it in the dictionary!

The scientists conducted their study on 32 adults. Half of these were NTs. The other half were Autistic Spectrum individuals. They put a circle of letters that flashed briefly on the screen while the test subjects were asked to look for specific letters while at the same time tasked with detecting a small gray shape that that popped up from time to time outside of the circle.

While there were only one or two letters on the screen, NTs and Autists performed comparably. As the difficulty of the task increased (the speed and number of letters increased), the NTs experienced a deterioration of their ability to detect the shape and “target” letters. The Autists, on the other hand, did not experience the same difficulty. As the task became more difficult, the Autistic Spectrum individuals consistently outperformed the NTs.

Lavie goes on to say that whether or not an Autist has the savant like abilities of Kim Peek (Wiki article here) or Stephen Wiltshire (site here), her study seems to indicate that this higher perceptual threshold is a trait that most Autists would seem to share.

I don’t know if I can explain it very well, but I will try. I have discussed this whole topic with many NTs and discovered some differences between us. According to my pet NTs and several scientific papers I have read… the average person perceives a fraction of what they see. (numbers range from as low as 4% to as high as 60%) As an example, please look at the following image. 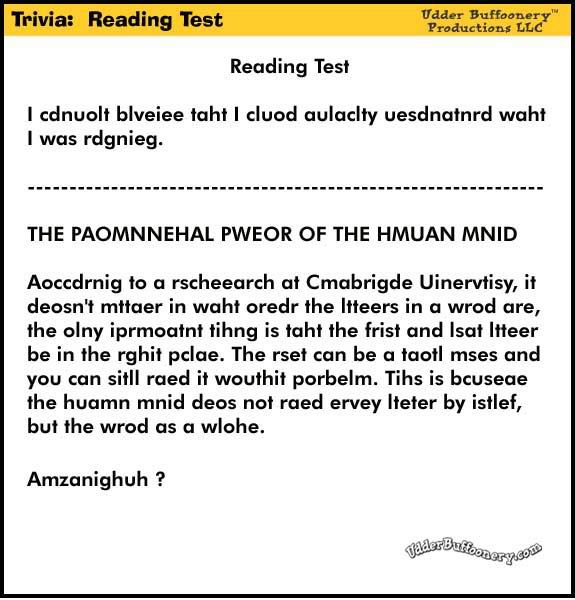 I have been assured that NTs can read this information pretty easily. I managed to decipher it after a bit of work. According to this graphic (and every NT I know) the first and last letter being in the proper place renders the word jumbles completely intelligible.

I have presented this same graphic to several Autistic Spectrum individuals and after their head exploded, we cleaned the walls and put the bits back together, we sat down and took a good long look at it. Since we possess the vocabulary for it, and the first and last letters are already in place, solving the anagrams was relatively easy… but because my brain takes in the entire word for processing, there was no instant understanding or even understanding at a glance.

I posted a variant of this video in a previous part of this series, but this one is unique. Take a look.

I caught it… and most of the Autistic Spectrum individuals caught it, too…

The NT brain buffers itself by only allowing perceptive retention (patent pending, again) of only a small fraction of what it sees. And honestly, that is all that is needed for human survival. We don’t need to see the grass in every nerve impulse… once it’s been seen, it is cataloged and indexed and then the brain moves on, filtering every thing that is non-essential out. There’s cars over there, grass here, DOG! Oh, he’s just playing frisbee… This constant filtering is both a great strength in NT perceptual cognition and a flaw, as things can easily be overlooked.

On the other side of the coin is the Autistic Spectrum brain. Each nerve impulse takes in everything within visual range without filtering. We don’t stop seeing or noticing the cars… We’re probably counting them. We don’t stop seeing the grass… The dog, since it is pleasing to the eye, moves with a grace that humans are not capable of and has fur – stays in our perceptive cognition.

We see a great deal more than the NTs around us… As with the NT brain however, this is both a strength and a weakness. We notice many more details and can process an amazing amount of information… for a while. Then we become over-stimulated. 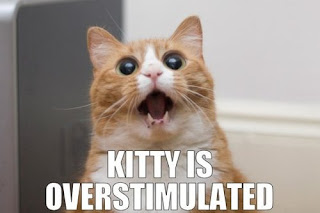 I have had several NTs tell me that they cannot wrap their minds around the concept of over-stimulation. I came up with a simple way to demonstrate it. Gently scratch your arm, moving only your fingers. They will cross the same spot over and over again. Don’t stop scratching. DO NOT vary tempo or pressure. Keep doing it. Keep going… now stop. While you have not damaged your skin, it feels irritated and raw. In spite of the fact that this is not the case.

That’s what over stimulation is. It isn’t what it is like… you have just overstimulated the nerves in that small patch of skin. Now… take that sensation and imagine what it would be like to see too much… so that your optic nerve was over stimulated… or to smell to much… taste, or hear too much. Difficult to wrap your mind around, isn’t it? While it happens to us on a regular basis, it is no easier to explain than it is to understand.

So… while I have been told by a couple NTs that they envy my perceptual acuity, i envy them the ability to go to a party, concert or a bar without just overloading.

1 thought on “Care and Feeding of your Aspie: Part 22 – Information Processing and Autistic Spectrum Individuals”