I make movies for my day job. That is to say… I am a film maker and I spend all my extra money making movies. Film making is one of those weird businesses that show no return on your investment until you “make it.”

This year, if I may so, is our year. We have 12 episodes of a web series going up, we have 6 shorts for competition, and at least one feature film.

Think about your favorite conversation in your favorite movie. This is my favorite example. Let’s assume that the actors don’t flub their lines and that they give the performance that the director wants on every take. To shoot this scene they had to shoot it a minimum of 5 times. 1 take with both of them in the shot. 1 over the shoulder on both characters (these can be shot at the same time). 1 for each of the face on close ups (done one at a time). And 1 for the profile shots (shot at the same time). Boring…

Think about how many pages you read when you sit on the toilet. That’s what? 10 pages? Even if you’re reading something like teen people (sparsely printed pages) or Reader’s Digest (small pages), that’s a lot of text.

The image to the right is an example of a page from a script (that one’s from the show, M.A.S.H.). As you can see, there is a white space. Your average movie is 85-120 pages. In Hollywood, they average 7 pages a day.

Read it again… In Hollywood, they average 7 pages a day.

We’re indie – this means we do, by ourselves, things that take 10-15 people to do, so we take it a little slower.

Since we’re indie, there are no other people to do all the tedious things. That means that my partner and I get to do things like “break downs,” (going through the script and listing everything from location to characters to props in every scene), counting the 8ths, (calculating how long each scene is to the nearest 8th of a page), and setting up shooting scripts.

With my ADHD, I have can’t concentrate. Well, that’s not true… I can concentrate… but only if there is something going on in the room that I can ignore. I know, right? Typically, I watch television via netflix to do this.

Due to a snafu with funds – My netflix is OFF!!!

And this is how I feel about it.

So… I’ve been forced to watch *GASP* LIVE TELEVISION!

I’m not talking about telethons or anything. I mean the stuff that is on television as we speak.

When I was a kid – if you didn’t like what was on, you just had to wait 30 minutes and there was ANOTHER SHOW ON!

What the fuck happened???

I am serious. Today, every show i saw was on in 2-4 hour blocks. It’s like every channel had a marathon going. It was weird.

I, literally, could have watched the old show “Friends” ALL day. Seriously. When one 9 hour block ended, all I had to do was change the channel and BAM! There it was! “Friends”!

I DIDN’T watch friends all day, but I could have.

What I did watch, however was “It’s Always Sunny in Philadelphia”, “How I Met Your Mother”, and “Futurama”.

It gets worse. Seriously… The “Simpsons” may get its own channel. I really like this quote: “”The Simpsons” has been on the air for 23 seasons, yielding a library of programming few series could ever amass.” 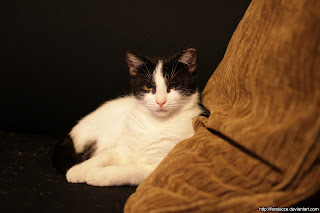 And you know what? Fuck Willie Nelson and Sarah McLaughlin! You guys are talented musicians. You make a lot of money as musicians. I know it only takes $18 a day to help an animal in a shelter…

I have rescued cats… the evil one that lives in the kitchen is a cat that was rescued from the streets… I don’t have a photo of that one on this computer, so you have to make do with Lilly and her judgement.

Oh, btw… I am thinking of driving out to the Geico headquarters and fire-bomb them for their new ad campaign. I’m not kidding… that pig does not make me want to do anything anywhere near buying insurance… it makes me wanna eat bacon.

You ask, “What are you talking about?”

I am talking about this.

I think i am going to end this entry before I just devolve into random, free floating aggression.

But I want my NetFlix back!