I normally avoid the word hate. It holds memories and associations of a bad time in my life. Before I was diagnosed bipolar, I had a very dark time… Hatred was my world view… LITERALLY, the word hate popped into my head without provocation or prompting on more than one occasion.

Sooo… when I use the word hate, you know it is a real big deal.

That being said – I hate Jud McMillin. I seriously do. 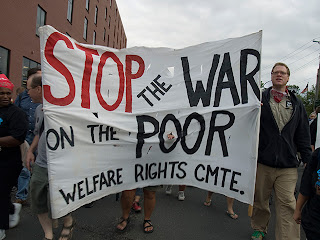 Jud McMillin is a republican legislator from Indiana. He proposed a bill that would mandate the drug testing of all welfare recipients. In grand scheme of things, republicans have been passing this kind of law at the state level for a while. Like, 30 laws in the last year have made drug testing a prerequisite to receiving all kinds of government benefits.

I am not one to praise our current political system, but I am actually proud of the democrats. I know… shocker… but the democrats have responded by issuing counter proposals that would require that ALL people who receive government money be drug tested – students, soldiers, legislators, welfare recipients and the disabled.

Now, just so you understand – I am not an advocate of those things at all. I believe it is a violation of our rights to privacy in this country. I also believe that the war on drugs was just a tool designed to control a portion of the population that was considered undesirable and to keep from firing police at the end of prohibition. Now, don’t go quoting me on it, this is just a personal belief and perspective.

I mean, let’s look at the reasons most often cited.

Sorry… that was a bit of a rant and long winded, but it’s just stupid, really.
ANYWAY…
This guy, Jud McMillin has been trying to make these laws that basically say – “We, the republicans, hate poor people and would like to deny them anything… anything at all that might make them happy.”
Well… it gets better.
A democrat in his state’s general assembly tacked a rider onto Jud’s “we hate the poor” bill. Normally, I hate those things. Really. And my reason for it is that they are rarely beneficial and almost never have anything to do with the laws they are tacked on to. This rider stated that the legislators themselves be tested for drugs. That is AWESOME!
But wait… it gets better!

After this provision was added…

McMillin withdrew his proposed bill! Now, Jud states that this withdrawal wasn’t because he fears that his pot smoking ways will be discovered. Of course not… I think he’s on shrooms, lsd, angeldust… Wait… that’s slander and defamation of character… Of course not… he’s as straight edge as it gets!

And this guy is a real winner. He hates the poor and discriminates against the LGBT (Lesbian, Gay, Bisexual, Transgendered) community as well. His website says “I will protect the integrity of the institution of marriage. I believe that a marriage is a union of a man and a woman before their peers, government, and most importantly, God. In southeastern Indiana the family has always been the foundation of our strength of community,” he said. “Our relationships with our wives, husbands, parents, children, siblings and other loved ones provides the glue that binds our common purpose. In these times of turmoil the rest of the country could learn something from our example.”

At least he didn’t cite the biblical definition of marriage-that shit’s messed up!