I know my blog doesn’t feature much in the way or proper English. Hell! Most of the time you get something akin to the image to the right here.

The gun sums up me up to a certain extent. I am a loose cannon. I am worse than that… I am a barely contained seething pot of rage… I am a misanthrope. I really do hate people. The average person can take a flying leap.

The suit… That’s easy. The suit represents my art form. I am serious… any time I have to go talk to someone with money, or hold auditions or the like… I HAVE TO GET DRESSED UP! I DON’T LIKE IT.

What? I didn’t talk about the monkey? Have you not read my blog?

I have a few Obsessive Compulsive things that pop up from time to time.

You can’t expect much from me here, because this is documentation of the stream of consciousness of a monkey in a suit… with a handgun. In spite of this, I really do try to keep some semblance of a casual, friends with benefits relationship with grammar. 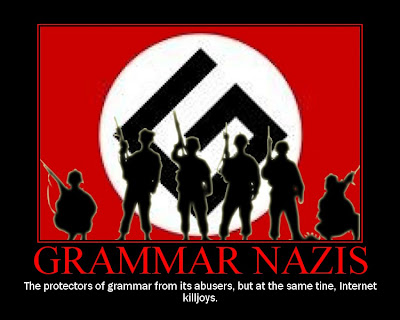 I may be talking about grammar, but I’m not one of these guys. Really, I’m not. But there are things that annoy the piss out of me. The big problem is that the things that piss me off, are SOOO common.

So pay attention!!! These are my linguistic pet peeves.

3) Your and you’re. You’re = you are. Your = something that belongs to you. This is pretty rudimentary. If you didn’t get taught this in elementary school, you should sue.

5) To, too, and two. Two = 2. Too = also. To = indicating motion or action. If you are an adult and get these confused, you should probably go back to school. I mean, you did it wrong.

6) Gingerly. I hate this word. I KNOW it’s a real word. I know it’s acceptable to use, but it bugs the hell out of me. -ly is a suffix that modifies a verb, making it an adverb. Not all adverbs end in -ly, but all words that end in -ly are adverbs. For example, rough becomes roughly… Gingerly… ginger is a spice. It does not become GINGERLY… YOU CAN’T GINGER!!! IT’S A NOUN!!!

7) “We’re pregnant.” BULLSHIT!!! Unless you are a sea-horse (the males of the species carry the babies to term), SHE IS PREGNANT… Knock it the fuck off!

8) “Predominately”. The word is predominantly. This wouldn’t bug me all that much, but I’ve seen it in newspapers! What the hell? Our journalists are not proofing their own work, and what is worse, the copy editors are missing it! Similarly, the words dominate and dominant. I have seen some personals ads that state “I am a dominate man.” Just… wow.

9) Woman vs women. Kind of like the last one…I have seen listings where people describe themselves in the following terms. “I am a women.” NO! NO! NO! No you are not! You cannot be A women. Women is plural. Woman is singular… you can be a woman… not a women. Oh! and the word WOMYN… I hate that… I am an equity feminist! I believe that we should all be equal… that being said, womyn is pretentious.

10) Probly. This is not a word. Probably is an adverb whose root is probable – not prob. Prob is slang for problem… that means that probly… is… what? problem… y?

11) Nawlins. I know…I KNOW…I’ve mentioned it before. Yes, we have an accent here, but we still say it as two words… New Awlins… NOT Nawlins. It’s not Nampshire… It’s not Nengland… It’s not upper Nork state… it’s not NAWLINS!!! 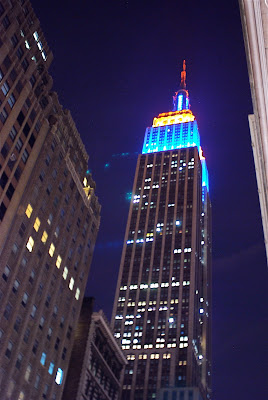 The dazzling Empire State Building in Nork City, Nork. Home of the Nork Nicks, Nork Jets and the Nork Yankees.