I went to see the Hunger Games this week. Before I get into the movie, I want to address some things.

Disclaimers:
First off, I read the books before the movies were announced.

I am not one of those annoying purists who whine and complain because “The book was better.” or “They left this out.” or “They changed so-and-so.”

I am not one of those people who thinks that every good book should be made into a film. As a matter of fact, I feel that most books should be left alone.

As a film maker, I am very cognizant of the fact that there are many things that have to be changed to make it work on screen. Most of the fans get pissed off that they changed things. Film is a visual art – books are not.

Now that we have those out of the way, there are a few other things that need to be discussed before we move on to the movie.

First off… Stephanie Meyers needs to be stopped. For the longest time, I felt that Joel Schumacher was history’s greatest monster. Schumacher was the director of “Batman Forever.” This film, in my opinion is almost as horrific a crime against humanity as… well other things that I won’t mention because I fear a lynch mob outside… it was an affront to human intelligence. It is summed up by one phrase – “Bat Credit Card.”

“But Feral! I thought you said Stephanie Meyers needed to be stopped? Why are you bitching about Joel Schumacher!?”

That’s easy. 1) I love bitching about Schumacher. Though, recently, (starting with “The Number 23”) he has redeemed himself a bit. 2) And it helps put everything into context.

At the theater, I love the previews. It’s an exercise in compare and contrast for me. Seeing what they advertise and what it comes out to be in the long run. I enjoy it… BUT…

Stephanie Meyers ruined the previews… First off, there was a trailer for “Twilight: Breaking Dawn part 2.” This bugs me for a couple reasons.

1) STOP THAT… make a friggin sequel… don’t make a long ass movie and cut it in half. It was annoying when they did it with Harry Potter… which I enjoyed (So sue me)… It’s unforgivable in the case of a ridiculous pre-adult hormone fest that appeals to tweens and causes damage to the vampire mythos for all eternity.

2) The purpose of a trailer is to build interest in the film. It is supposed to make you want see the movie. Fan service is fine, but for the rest of us… at least TRY to get our attention. If you have a fan base, it is ALWAYS better for you to TRY to get to watch your film. Slapping a couple images of the principle actors on the screen, whipping out a couple dumb lines, and the dribbling the film’s name at the end is NOT ENOUGH.

3) I have read the books. Not because I am a fan… but because I have a personal rule. I cannot say something sucks, that I hate it, or that I have an opinion on it without experiencing it for myself. I read the books, and I saw the first two films… I will watch the last two ones as well… and I can say – “I hate these films.” Anyway, the third and fourth films are about the fact that “Bella” gets pregnant, the baby damn near kills her with a kick in utero, and to save her life she is turned into a vampire. In the preview, it shows Kristen Stewart (of the “I act by chewing on my own face” school of acting.”) and Robert Pattinson (of the opposing, but no less valid, “I think girls smell bad” acting school.) embracing. Pattinson then says, “We’re the same temperature, now.” or something like that. WTF? No, seriously! WTF??? HOW IS THIS A TRAILER? It’s just mental masturbation for the tween and cougar set (lemme tell you how horrifying this combination is.).

The entire audience twittered (not the website) and I guffawed.

Then… THEN… THEEEEENNNNNNNNN it got worse!

Stephanie Meyers… An uninspired, poor excuse for a writer of train-wrecks that go on to become the movie equivalent of genital herpes wrote another book called, “The Host.” And Hollywood decided that they wanted to make another train-wreck. This would be fine if it was a train-wreck like the movie “Super 8″… one that you want to see… No… It’s about an alien invasion… Kind of… I think…

ANYWAY… The pre-show was over.

Before I can get to the movie, I have to address another source of irritation. A lot of people have been saying that Suzanne Collins stole the idea from Battle Royale.

What’s Battle Royale? It’s a Japanese novel, Manga (Japanese comic book), Anime (Japanese animation), and film. People are comparing movies, but aren’t even aware that there is so much more to the back story on it.

There are a couple similarities. In both series, children (teens) are gathered, put into an arena and have to fight to the death.

This is where the similarities end.

Setting
The settings, just by their very location and the nature of the cultures involved create very different stories.
Battle Royale is set in a near future Japan. The setting has very little to do with the actual story, except in the fact that the government has sanctioned the ultra violent television show, “The Program.”
The Hunger Games is set in a dystopian future America. Several states rebelled against the government. A bloody war followed, and the rebellion was quelled. Now, the country is divided into districts 1-12.

The Set-up
Battle Royale the Program is a television program that pits an entire class against one another in a fight to the death. The students all know each other and are forced to kill each other, lest a collar laden with explosives beheads them. They are provided with weapons ranging from blow guns to machine guns and not every object is useful. Some of them are given a useless item as well. The class is chosen specifically for their ability to be entertaining. No outside interference is allowed. The winner gets to live.
The Hunger Games as punishment and a reminder to the districts that rebelled, two children are chosen from each district are chosen-AT RANDOM. They can actually volunteer. Only one other person is known to each contestant. They are provided with weapons (there are no firearms) and food. Everything that is provided to the tributes is useful. For exorbitant sums of money, sponsors can send gifts to the children.

The Pay-off
Battle Royale The writers, artists and directors of the multiple incarnations of this intellectual property spared no expense. Battle Royale is a display of hypersexual psychoviolence at its best (or worst, as the case may be). It features multiple GRAPHIC sex acts, incest, incredibly graphic language and violence. It was extreme, even by my standards.
The Hunger Games was written with death at it’s core, but the most sexual moment is a kiss between two contestants… not for the sake of sex, but for the sponsors… so they could survive. The blood was glazed over in the book, and even more-so in the film.

Lastly… Collins states she was unaware of the existence of  Battle Royale. Only elementary students and stupid college students plagiarize the works of others. Well, them and politicians. Suzanne Collins is a PROFESSIONAL writer. Any professional writer KNOWS it is professional suicide to do that. She didn’t steal the idea.

Now that we have that all out of the way-let’s talk about the movie.

The Hunger Games was, in my opinion, well done… It was a faithful reproduction of the book. It was also done very well. They chose the right things to keep, and discarded the things that they could get away with dropping and not effect the story.

“WHY?! WHY DID THEY CHANGE OR REMOVE ANYTHING!?”

A few reasons, really. First of all… the whole two movies to tell a story that aren’t sequels crap is annoying. Secondly, books are several hundred pages-scripts are about 120. You have to lose some things. The descriptions that are designed to paint a picture in your mind are taken care of visually. Also, movies are action and dialogue. There are a lot of things that work in books just don’t work in movies. Take a look at Quentin Tarantino’s work. He is successful, but that is because of Pulp Fiction. I love his films, but he got lucky with that one. He uses a lot of literary devices that fall flat when put on the screen.

SO… you want to see your favorite book made into a movie? They have to lose some things. They lost some things, and did it the right way.

The story telling was well done, the editing (while weird in a couple places) was tight, and the visuals were sharp. Jennifer Lawrence, the actress who played Katniss, was amazing. The book has a lot of internal monologue, and Lawrence showed that monologue in her facial expressions and body language… IT WAS AMAZING.

Now, I have a couple nit picky things. These are only my opinion. There is no factual backing for them… but this is how I feel.

1) Shaky cam has it’s place. There are uses and times it really works well. A lot of this movie uses shaky cam at the wrong time. I like shaky cam, when it’s done well. I like it when it is composed well and you can STILL tell what’s going on. Unfortunately, that is not what they chose to do. It was disorienting and displaced a lot of the action to the point where you were unsure what was happening. I know it was done to  keep the PG-13 rating, but it just didn’t work.

2) The capitol was not as shiny as it should have been.

3) The fashions were not as extreme as the books implied they would be.

4) There were some really odd editing choices, especially during the scenes involving Effie Trinket.

5) There were several times in the film that they cut to a close up on Katniss. If you know anything about imaging technology or film, you can tell that it had been a mid-shot that they zoomed in on in post. It was full of grain and noise and it wasn’t a stylistic choice (unless they wanted a jarring transition that set the audience on edge for a reason that they couldn’t figure out). If you are missing a close-up… go re-shoot. 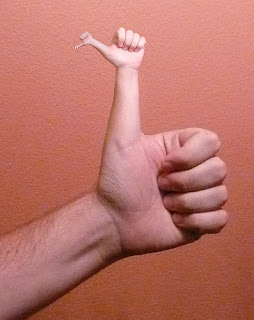 8) That arrow should have stapled the guy’s hand to Peeta.

All in all, however, I enjoyed the film and would recommend it to almost anyone.

Images in this issue SHAMELESSLY stolen from the following sources: