I am getting tired. The whole point of film is to tell a story. These stories should be original, or at least original takes on existing themes.

Don’t get me wrong. I mean, the debate over the Hunger Games and Battle Royal is stimulating, but meaningless. Neither of them is original, as they are just modern day Shakespeare

Well, let me tell you…

Shakespeares dramas started “In Medias Res.” Right in the thick of it. Battle Royal starts with the students waking up in the “Classroom” where they are told that they have to fight to the death. They are already kidnapped. In The Hunger Games, the revolution has happened and the back story is already deep in the plot. It’s been going on for a long time.

Willie’s plays had lots of references to blood. ‘Nuff said.

Foreshadowing. Shakespeare loved it. To be fair, Battle Royal had it in spades… It wasn’t, (by any definition) subtle, but it was there. The Hunger Games had it as well… It was clear that the little sister was going to be chosen from the moment that they told us she had only one entry in the drawing this year.

A foil. Shakespeare had no other literary tools to exemplify or codify the traits of one character but the foil. I don’t know if this was a symptom of the writing of the time, or if he was just a one trick pony, but All of them had them. Rue is Katniss’ foil. Katniss, at her heart, is a vicious opponent with a great capacity for violence, but without Rue, she would have not been able to live up to that. Noriko is Shu’s foil in Battle Royal. Without her, the inherent bravery in this “Nice Guy” character would not have been able to shine.

It has been said that “There is nothing new under the sun.” I believe this with all my heart. This doesn’t mean that we have to retell the same stories over and over.

Hollywood is guilty of remaking the same thing over and over and over… 12 angry men, 101 dalmatians, Alfie, Always (A guy named joe), Angels in the Outfield, Annie, Assault on Precinct 13, The bachelor (Seven Chances), The Bad news Bears, Bangkok Dangerous (Made by the same director… TWICE), Bedazzled, Black Christmas, The Birdcage (La Cage aux Folles)… and MANY MANY MORE. 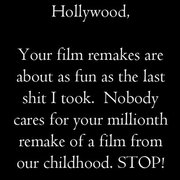 It needs to stop… Really.

No one wants to see this shit. I know, some people will go pay to see it in the theatre because they remember the original film from their childhood, but that is no reason to be an unoriginal, asshat, half-assed hack.

I really do mean it when I say, you need to stop it…

What was that? You say that original titles don’t make any revenue? BULLSHIT!

My Big Fat Greek Wedding. The Blair Witch Project. Paranormal Activity. Do those sound familiar? Yeah… they made hella bank… you know what they had that your other original titles didn’t? They had publicity… Free publicity by being award winners in film festivals…

It wasn’t their quality that made them successful… It was that they had that publicity. Examine your numbers and you will find that your  most successful films are the ones that had media backing… the reason that your original titles don’t make bank is because you don’t support them… You blitzed the hell out of the public with AVATAR, by Saint J. Cameron… it was original and POW! BOX OFFICE SMASH! It’s you’re fault that original titles fail!

Remaking Short Circuit… Bad!
Remaking it with the dumbass who is responsible for SPONGE BOB SQUARE PANTS?! Worse!
Letting him make the robot look more threatening… Artistic license and it might actually work…
LETTING HIM MAKE IT A KIDS MOVIE!?! FUCK YOU!

Stop ruining our childhood and turn out some original titles, assholes! And if you do… give them the Publicity and Advertising budget you should and you will have a hit… Just look at the Matrix, Star Wars, Friday the 13th, ALIEN!