I came to a realization the other day. Before I wrote about it, I did some inquiring and some research. I’ve been struggling with this piece all day… It’s mainly because I cannot find a name for what I want to discuss. At first, I thought that it fit under the heading of Body Dismorphic Disorder… but that wasn’t it.

I was in the bathroom today and I caught sight of my own reflection in the mirror… and for a moment, I was shocked… I looked at it and was actually confused by what I saw. My brain could not rectify the guy in the mirror with who I am. I asked the sister person (if you don’t remember – she is Autistic), a couple Aspie acquaintances, and asked some people on one of the Autistic spectrum boards… and it seems that this is common.
There was a term for it in the movie – “The Matrix.” They called it “residual self image.” It was explained as the way a person sees themselves. It’s odd… because one’s self image can be DRASTICALLY different than the reality of the situation. I don’t know about NTs, but Autistics and Aspies can look in the mirror and never really see the whole of what is in that mirror.
This may sound odd to the average NT, but I brush my teeth, shave my face and groom my goatee and mustache routinely… but I never see myself… Not really… I see the parts, but never the whole. Not really. And, honestly, that is part of the diagnostics for Autism and Asperger’s… Obsession of the parts of things. This obsession over the parts of things, has a downside… ignorance of the whole.
One way (at least for me) that this manifests is that I really don’t realize how big I am. In case I haven’t mentioned it… I am 6’9″… that’s right…I am over 2 meters tall. I weigh in at 295 pounds (134 kg). I am a MONSTER of a man… The thing is, I don’t realize it. Even after seeing it, over and over and over… I don’t realize how I must appear to other people…I never see it until I see myself in photos with other… normal people. And when I do see the pics of me with other people… it is a shock… every time… EVERY time.
Why am I discussing this here? Well… Many NTs have commented that their Autistics and Aspies seem very down on themselves… That they cannot comprehend why someone would want to be our friend, or why someone would be attracted to us. And the answer is this dismorphic view of ourselves, this residual self image that has nothing to do with how we really look or who we are intellectually.
You will find that your Autist or Aspie will have problems accepting compliments that do not align with their own perceptions of why they are. A lot of people take this to mean that we have low self esteem, but that is not the case at all. It is that we have a very firm and concrete image of who we are, of what we look like. True, this image is often wrong… Often DRAMATICALLY wrong, but it is what we KNOW about ourselves.
That is why compliments often make your Autist or Aspie uncomfortable. We cannot imagine why someone would make a statement that is so obviously not in= keeping with what we know about ourselves.
And this can be a big deal in many, many situations – compliments on appearance, especially from a romance interest, since most of us don’t see ourselves as the object of romantic interest; compliments on skill sets; compliments on achievement; artistic achievement… Just keep in mind that we don’t see ourselves the same way you do… so giving us a compliment may be a difficult task. But ALSO watch out… we can be terribly arrogant about those thing we KNOW about ourselves. 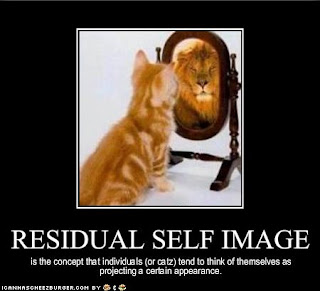 I have to apologize on behalf of all of us for this… we’re doing the best we can.
Images in this issue SHAMELESSLY stolen from the following sources:
http://t.qkme.me/3slnlt.jpg
http://www.ghulmil.com/wp-content/uploads/beautiful-cats-hd-wallpapers-18.jpg
http://www.singleblackmale.org/wp-content/uploads/2012/05/RSI.jpg
Follow me on social media... You know you want to!